We have been asked many times for an easy to make Guatemalan recipe, to be used in raising support activities, in gatherings to plan mission trips to Guatemala or in a debrief meeting after the trip.  So we decided make a tutorial to share a recipe that you can make even at church.  It’s easy, cheap, and convenient.

Posted by Unknown at 8:51 PM No comments:

Meet one of the students from Proyect: “Creciendo Juntos”, Sumpango 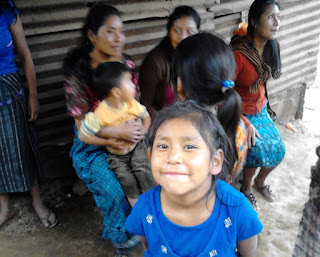 Is there anything that you don’t like?
-          A girl hit me and said that I didn’t want to lend her school things.  I like everything else.

What would you say to the people who help this school?
Thank you very much for everything because without your help I wouldn’t be who I am and wouldn’t be able to read.  You are very good, I wish God bless you.

With the help of many friends and brothers in Christ, Breaking Cycles has been able to help the Project: Centro de Ayuda Integral para la Niñez “Creciendo Juntos”, in Sumpango from Busca a Dios Church.  This project is a school with 25 kids now, of ages between 3 and 14, their economic situation is very bad, and that is the main reason why parents don’t send them to a normal school.  This project provides them with the opportunity to have a different future, to fulfill their dreams and to have higher goals in life. They learn to read and write, math and science, moral orientation, teachings on hygiene and good habits, care for their teeth like brushing and application of Fluor, medical checkups, they have been treated for stomach worms and head lice, some needed recreation, a daily healthy snack to eat, and other benefits like donations of used clothes, shoes, toys, etc. along with pastoral loving care.

If you would like to get involved, go ahead and contact us.   We have some great projects coming up and we want you to be part of it!
Posted by Unknown at 2:34 PM No comments: 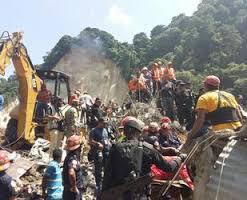 With heavy hearts we would like to share with you the reasons why Guatemala should be in your prayers again.  We are at the middle of the rainy season and the heaviest of the rain is yet to come in November. Nevertheless it has already rained a lot and the ground has already absorbed a lot of water.
Last October the 2nd, at 9:30 pm we faced the first disaster related with the rain in this year, a huge mudslide, in an area pretty close to the city.  El Cambray 2 is a small village located at the base of a mountain.  This community was completely vanished in a matter of seconds as the big mountain collapsed over them. This was a small community of about 125 houses, families of about 5 members in each household.  At the moment of the landslide they lived terrible moments because many of them were trapped in their houses under the rubble sending text messages on their phones, asking for help.
This is just one of many sad stories that we have been hearing: Maria is a taxi driver. At 9:00 pm, after a long day of work, her grownup son asked her to go get some pizza in a nearby place to celebrate her grandson’s birthday; her daughter-in-law and granddaughter accompanied her.  While she was on her way back home after getting the pizza she received a phone call from a client asking her to pick him up. She then had to decide between making some extra money or making her family wait for the pizza. She decided to make the trip.  Her decision saved her life but by the time she got back, her neighborhood was gone and she had no idea whether she would be able to see the rest of her family ever again.
At this moment, October 6, 2015 at 7:00 pm, 140 people have been reported dead including a number of children and an approximated 450 are still missing.  A group of rescuers specialized in these kind of disasters came from Mexico to support the work that the firefighters, army and Police Department are doing.  Rescue workers said that after 72 hours the possibilities of finding somebody alive are very low but they still are working very hard to find someone or to recover all loved ones from the mud.


Please, we are asking you to keep Guatemala in your prayers especially because CONRED [National Commission for Disaster Reduction] announced that there are at least another 300 communities facing the same kind of risk in our country and as it was said before, the hardest of the rainy season is still yet to come.

Posted by Unknown at 8:31 PM No comments:

It has been a wonderful summer in Sumpango, Breaking Cycles and the rest of the team are very proud to share with you the privilege that we had of being used by the Lord here. This is our first year partnering with Next Step, and through them, we received 11 wonderful ministry groups.

We chose a retreat center called Paz en la Tormenta to have our teams there and at the end we realized that it was a good place, teams liked it, personnel were polite and helpful it was clean and safe and it was near the church and all the ministry sites.

Through Next Step Ministry in Colonia Vistas del Sol, we were able to give physical help to the community: painting the borders of the streets, painting the outside of some houses and donating a pair of goals for the soccer field.  Immediately, we were able to locate and meet some community leaders who showed their appreciation for the provided help.  Pastor Manuel from Colonia Vistas del Sol said: “Before the visit of Next Step’s groups we had Family Groups but very few people came. Now, many guests have come. We are gaining recognition and esteem among the community.”
Read more »
Posted by Unknown at 10:08 AM No comments: 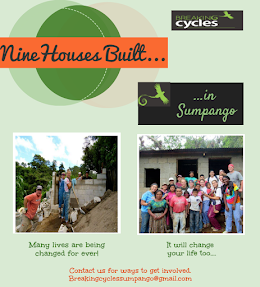 Help us help a family.

Our team is dedicated to help the community of Sumpango, Guatemala with the help of friends and colaborators from the U. S. and the rest of the world.
Here you will find ways to help with our ministry either by coming or praying for our needs.
You can contact us at:
breakingcyclessumpango@gmail.com